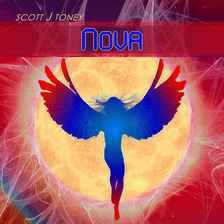 Welcome to a realm where each planet has a soul that lives on even after that planet's death, searching the galaxy to free other planetary souls from their rock-encrusted wombs.

With every planet they devour they become stronger, bonding with mortals and giving those mortals mutated powers until they can destroy the planet they are on.

Welcome to the realm of the fantastic, where a winged woman fights alongside a cyborg, a telepath, and a seer for survival. Where anything is possible and were-beasts roam the land.

Good is corrupted. Evil is beside you. Faith is lost.
And then...

This novel contains all three books of the completed Nova trilogy. As a bonus, it also includes The Fall of Eon, the prequel to the Nova realm. 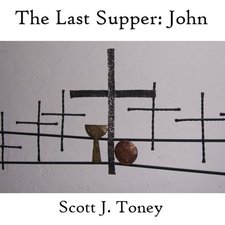 This is the story of The Last Supper told through the mind of the apostle John.

John sat on the floor at a low stone table while the other apostles spoke. Candles danced light around them.
“Did you hear what Jesus spoke in the streets?” Bartholomew asked in low tones to Thomas across the table. “He said ‘The hour has come for the Son of Man to be glorified. Very truly I tell you, unless a grain of wheat falls into the earth and dies, it remains just a single grain, but if it dies, it bears much fruit.’ What do these words mean? He speaks in riddles. If he is to be glorified will he now take his place as ruler over the land of Jerusalem? What role would we play then?”
Thomas took a hand and placed it on the table, turning to his fellow apostle. “I do not think he means to rule, but I am afraid I also do not understand. He spoke of death, and yet he then told the masses ‘Whoever serves me must follow me, and where I am, there will my servant be also. Whoever serves me, the Father will honor.’ I do not think he would speak of serving and following if he or we were to die now. But then he has said before ‘The Son of Man is going to be betrayed into human hands, and they will kill him, and on the third day he will be raised.”
“I would die for him if he asked,” Simon Peter spoke from nearby John.
It had been like this for days, ever since their arrival to Jerusalem during the festival while Jesus rode the donkey over branches of palm. Jesus spoke words they did not fully understand, words that brought fear to the apostles. John looked around the table at his eleven brothers. Their faces were apprehensive, some masking it with jovial talk and others asking questions about what was to come.
All seemed to feel this coming meal with Jesus was important and pivotal in some unknown way. Tension held between them at all times.
AudioBook, The Last Supper: John 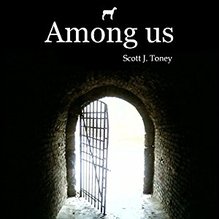 Jesus didn't flee the sinners for higher ground; he dwelt amongst them to save their souls. He is still here.

Have you ever felt that a person in your day was sent to you by God to help you just when you needed it, to guide you or carry you? People say that God no longer acts, but when we open our eyes we can see him everywhere. This book is about that presence in our lives. It is about what it sometimes could be.
AudioBook, Among us 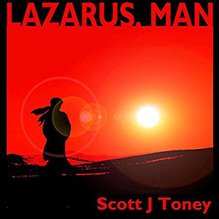 This is the story of Lazarus of Bethany, told through tale and tribulation.

Darkness. Nothing. There was a void in the world around him, without light or sound. A heaviness weighed on Lazarus' soul as he grasped for being. He sensed in the darkness there had been light only moments before but he could not grasp what that light was. Suddenly he felt a pulse in his chest. Something heavy held his body firm. Memories flooded through his mind of heat, cattle...family. The world was somehow wrong.

He tried to move but found he could not, could not raise the heaviness above him. He smelt Earth. Then, with a thrust, he pushed his bound arms out of the cave soil he was buried in and braced them on the Earth, using his weakened strength to pull upward. Earth caved in about him as he rose from his grave, his arms and legs bound with bandages. There was a cloth over his face he could not remove. He saw a faint light before him through the cloth.

"Lazarus, come out," a voice beckoned. He walked slowly in his bandages toward the light and could feel a warm breeze move about him. The sun radiated in the cloth over his eyes. "Unbind him, and let him go," the voice returned. He felt coarse hands on his arms as bandages were unwrapped from him. Coolness came over his skin where they had been. Lazarus breathed heavily, unsure of what was happening.

He had a vague memory of being sick before this. He was barely aware of who he was. The cloth over his face was pulled away and he squinted as sunlight blinded him. A bearded man with long, wavy hair stood in the light. Jesus, he thought in disbelief as the man approached, placing his palm on Lazarus' forehead. "You are healed, brother," Jesus told him as Lazarus' sisters rushed to his side. "You are still needed in this world."
Audiobook, Lazarus Man

The Ark of Humanity 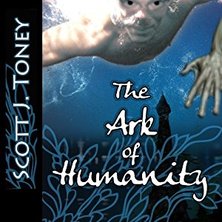 God flooded the earth to annihilate humanity's sins. What if that sinful race didn't die when floodwaters covered them but instead adapted to breathe water? Under the depths of the ocean one boy has raised himself, until the day when he meets a dark-skinned man with news that will change the lives of his civilization forever.

Now he must save his people from another empire of water dwellers bent on enslaving the oceans and torturing his peaceful realm.

Yet another question is posed as he learns that his people are descended from humans that lived on the land above the ocean; a people that were destroyed by floods made by the rage of God.

If they have to, in order to escape, will they be able to breathe air and join whatever is left of the world above the waters?

What would they find there? Is the mythological Noah still alive?
Addiobook, The Ark of Humanity 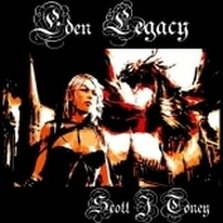 In the land of Cush, Princess Lilya suffers under the rule of her father, until the day when young King Thomas of Havilah invites her away to his lands. There, she hopes to find peace she has never known. But Thomas has been drawn to a foreign land, to figs he hopes are from Eden and the Tree of Life.

When he eats them to heal his wounds things change within him, distorting him in ways he could not predict. Now Lilya must make a decision. Does she stand by Thomas's side or act to dispel the evil consuming his soul? Amidst this world Lilya has befriended a dragon. There are secrets within the beast that could determine all their fates.
Audiobook, Eden Legacy 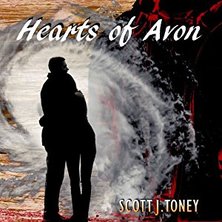 In Avon, a beach town along the Outer Banks of North Carolina, Ben is falling fast for the beautiful and intelligent Caroline, even as they both deal with her stalker ex-boyfriend who has followed her south on vacation.

As Ben learns the depths of the other man's madness his and Caroline's relationship runs into another wall, level 3 Hurricane Irene moving quickly toward the Outer Banks. When the storm arrives, all of their lives will be drastically changed.

How will they learn to cope with the consequences? When they are tested with a disaster on the brink of their comprehension, how will they pick up the pieces of their lives?
Audiobook, Hearts of Avon
Powered by