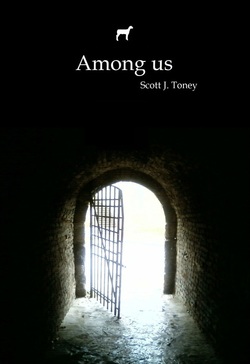 Jesus didn’t flee the sinners for higher ground; he dwelt amongst them to save their souls.
He is still here.

Have you ever felt that a person in your day was sent to you by God to help you just when you needed it, to guide you or carry you?
People say that God no longer acts, but when we open our eyes we can see him everywhere.
This book is about that presence in our lives. It is about what it sometimes could be.

He stood in the abandoned house as the sun rose, staring out its attic window, in awe of its orange brilliance on the horizon.
Every time, he thought. Every day it is so beautiful.
He looked around at the bookshelves lining the attic walls and a long unused birdcage that sat in the corner of the room. He remembered seeing it when it had been in use… such a beautiful space… such a wonderful man who owned it in that man’s time.
Focus, he thought. The day is young but it will go quickly.
He mentally made a checklist of everything on his person, three shirts on his back, three pair of pants, multiple socks and a set of gloves. A bag stuffed with money was tucked inside his shirts and a heavy coin purse hung to his side.
The book, he thought and went to the musty bookshelves. He traced his fingers along their bindings, stirring a thick layer of dust before he found the tomb he desired, pulled it from the shelf and blew the dust off. Yes, he thought and placed it in his large pant pocket. Oh, and I almost forgot. He took several steps across the room to where the birdcage rested. Beside it was a bottle with a letter in it. You will do. He stuffed it in the pocket of his other pant leg.
Among us, Amazon 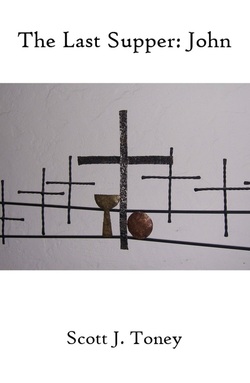 This is the story of The Last Supper told through the mind of  the disciple John.

John sat on the floor at a low  stone table while the other apostles spoke. Candles danced light around them.
“Did you hear what Jesus spoke in the streets?” Bartholomew asked in low  tones to Thomas across the table. “He said ‘The hour has come for the Son of Man  to be glorified. Very truly I tell you, unless a grain of wheat falls into the  earth and dies, it remains just a single grain, but if it dies, it bears much  fruit.’ What do these words mean? He speaks in riddles. If he is to be glorified  will he now take his place as ruler over the land of Jerusalem? What role would  we play then?”
Thomas took a hand and placed it on the table, turning to his  fellow apostle. “I do not think he means to rule, but I am afraid I also do not  understand. He spoke of death, and yet he then told the masses ‘Whoever serves  me must follow me, and where I am, there will my servant be also. Whoever serves  me, the Father will honor.’ I do not think he would speak of serving and  following if he or we were to die now. But then he has said before ‘The Son of  Man is going to be betrayed into human hands, and they will kill him, and on the  third day he will be raised.”
“I would die for him if he asked,” Simon Peter  spoke from nearby John.
It had been like this for days, ever since their  arrival to Jerusalem during the festival while Jesus rode the donkey over  branches of palm. Jesus spoke words they did not fully
understand, words that  brought fear to the apostles. John looked around the table at his eleven  brothers. Their faces were apprehensive, some masking it with jovial talk and  others asking questions about what was to come.
All seemed to feel this  coming meal with Jesus was important and pivotal in some unknown way. Tension  held between them at all times.
Amazon.com 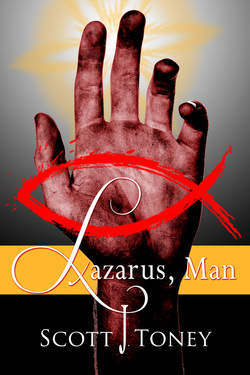 This is the story of Lazarus of Bethany, told through trial and tribulation.
*
Darkness.
Nothing.
There was a void in the world around him, without light or sound.
A heaviness weighed on Lazarus’ soul as he grasped for being. He sensed in the darkness there had been light only moments before but he could not grasp what that light was.
Suddenly he felt a pulse in his chest. Something heavy held his body firm. Memories flooded through his mind of heat, cattle… family. Where are my sisters? What has happened to me?
The world was somehow wrong.
He tried to move but found he could not, could not raise the heaviness above him. He smelt earth.
Then, with a thrust, he pushed his bound arms out of the cave soil he was buried in and braced them on the earth, using his weakened strength to pull upward. Earth caved in about him as he rose from his grave, his arms and legs bound with bandages. There was a cloth over his face he could not remove. He saw a faint light before him through the cloth.
“Lazarus, come out,” a voice beckoned.
He walked slowly in his bandages toward the light and could feel a warm breeze move about him. The sun radiated in the cloth over his eyes.
“Unbind him, and let him go,” the voice returned.
He felt coarse hands on his arms as bandages were unwrapped from him. Coolness came over his skin where they had been. Lazarus breathed heavily, unsure of what was happening. He had a vague memory of being sick before this. He was barely aware of who he was.
The cloth over his face was pulled away and he squinted as sunlight blinded him. A bearded man with long wavy hair stood in the light. Jesus, he thought in disbelief as the man approached, placing his palm on Lazarus’ forehead.
“You are healed, brother,” Jesus told him as Lazarus’ sisters rushed to his side. “You are still needed in this world.” There was a crowd gathered beyond the cave’s entrance.
“Brother…” Martha cried and kissed his cheek. Her soft hands grasped one of his. Tears streamed down her face. “What a blessing…”
Mary had embraced him and was kneeling before Jesus now. “Thank you, Jesus. How could we doubt you are the son of God?”
“Rise, sister,” Jesus told her. “There is no need to kneel for me. God’s grace is given freely. It is him who we should praise.”
“And through you he has raised our brother from his tomb. We are forever in your debt.”
Jesus took her hand and helped her to rise. “All I ask is your belief and your mouths to spread God’s word in the coming days. Our people will soon face days when believing is much harder than it is now. But come, let us rejoice in what God has done.”
He turned to Lazarus, embracing him. Lazarus felt the warmth of the man and felt his sense of confusion change to a feeling of peace. When Jesus pulled his arms away Lazarus walked out into the sun, through the awestruck crowd toward his home.
A sheep baaed as he passed. He opened the front door to his home and headed to his room, lying down on his straw bed, closing his eyes and giving in to darkness and rest.
Amazon.com
Barnes&Noble.com

Zacchaeus: Issue 1 of Pulpit to Page 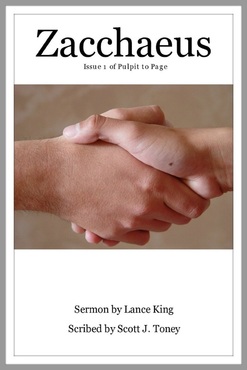 Zacchaeus
Issue 1 of ‘Pulpit to Page’
This is a sermon given by Lance King at Chestnut Grove and scribed by Scott J. Toney, so that it may be a blessing. Full permission to scribe this sermon is given by Lance King and 50% of all revenue is donated to Chestnut Grove so that it may be used toward Church ministries.
*Excerpt*
Now, today you heard the story about Zacchaeus. How many of you know about Zacchaeus? How many of you know the song about Zacchaeus? Well let’s just hear it.
Zacchaeus was a wee little man, and a wee little man was he.
Perfect. Zacchaeus is a man you know. And what you know about Zacchaeus, even if you don’t know anything else, is you know that he was a wee little man, right, and so you probably have a cartoon image in your head that you got in second grade about Zacchaeus. This is the little tiny guy that climbed a tree, right?
Well I invite you today to consider suspending what you think you know about Zacchaeus. Epic Tettus taught that you can teach a person anything except that which they think they already know. Many of you think you know Zacchaeus. Luke introduces five characteristics about Zacchaeus that I hope will challenge what you think about him. And today’s text tells the story. In Chapter 19, Verse 2, we have the first of five.
One thing we know about Zacchaeus. It’s something about what he did. We see that a man was there in Jericho named Zacchaeus and he was a chief Tax Collector. Zacchaeus lived in a town, Jericho, where there was lots of commerce. It was on a trade route, lots of business, so there would have been lots of tolls and taxes to collect. Zacchaeus would have been a prominent figure. He was a business owner. He was someone who had some social status in the community. He wouldn’t have been liked by others because he had a legal legitimacy, a power legally to go to the ordinary folks and say you owe twelve coins, but I want fourteen or else I’m gonna turn you in or steal your sheep or something like that. He had the power legally to do that. That kind of power generally creates a kind of awkwardness socially. If I said that to you you’d think, I’m not so sure I want to be around that fella. Zacchaeus was that guy. He was known by everyone and liked by almost no one. He was a chief tax collector, a man of status in Jericho. His relationship with the crowd socially would have been tenuous at best and tumultuous at worst.
Zacchaeus, Amazon
Powered by